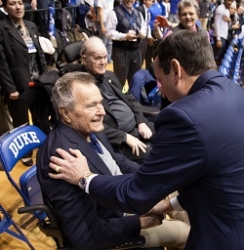 for Commitment and Leadership Toward Eliminating Cancer

The 41st President of the United States, George H.W. Bush, traveled to Cameron Indoor Stadium on the campus of Duke University in Durham, NC to recognize Duke men’s basketball head coach, Mike Krzyzewski, for his personal commitment and leadership in working toward eliminating cancer as a public health threat.

Among the many distinguished roles he has undertaken during a lifetime of service to our country, President George H. W. Bush is also the founder and co-chairman of the CEO Roundtable on Cancer.   Since the organization’s founding in 2001, when the former President challenged a group of executives to "do something bold and venturesome about cancer," “Coach K” has provided very personal and passionate support and leadership as an Honorary Member of the CEO Roundtable, a group he termed a “dream team” of committed, health-minded, CEOs.

The CEOs responded to the President’s challenge by creating and encouraging the widespread adoption of the CEO Cancer Gold Standard™ which has now been adopted by nearly 160 employers, large and small, in the U.S.  Today, more than 4 million employees and family members are benefiting from the vision of Gold Standard employers. President Bush has referred to the Gold Standard as “a marvelous example of America's corporate leadership at its golden best.”

On and off the basketball court, Coach K has also been a tireless leader in the effort to reduce the risk of cancer, promote early detection, and ensure access to quality treatment.   When Coach K took to the court that bears his name in Cameron Indoor Stadium, he wore a CEO Cancer Gold Standard pin on his right lapel as he does at every game.  Wearing the lapel pin close to his heart represents a very public display of his personal commitment to the fight against cancer.

“President Bush and Coach K share a personal commitment and a focused intensity that inspires all of us to be bold in our efforts to improve lives and eliminate cancer as a public health threat across the globe,” said Christopher A. Viehbacher, chief executive officer of Sanofi and chairman of the CEO Roundtable on Cancer.

Through the support provided by the CEO Roundtable, there is no cost for employers, large or small, for-profit or not-for profit, to apply for Gold Standard accreditation. To earn accreditation, a company must establish programs to reduce cancer risk by eliminating tobacco use at the workplace and providing cessation support; encouraging physical activity; promoting healthy diet and nutrition; detecting cancer at its earliest stages; and providing access to quality care, including availability to participate in appropriate clinical trials.

In addition to the National Cancer Institute (NCI) and Centers for Disease Control and Prevention (CDC), sixteen NCI-designated cancer centers and over sixty other hospitals and medical centers have earned Gold Standard accreditation. CEOs from across industries are keenly aware of the tremendous impact they can have in improving health, controlling health care costs and making a difference beyond their organization’s walls in the effort to address cancer and other chronic diseases.   In North Carolina, Gold Standard employers include Aldagen, Inc., AlphaMed Press, BlueCross BlueShield of North Carolina, Duke Medicine, GlaxoSmithKline, Lowe’s, Ockham, PPD, Inc., Quintiles Transnational Corp., Red Hat, RTI International, SAS Institute, UNC Health Care System, and Vidant Health.  Other Gold Standard employers include insurers such as Aetna, Cigna, State Farm and several other Blue Cross affiliates; law firms, such as Hogan Lovells and Jenner & Block; and a range of leading employers including American Century Investments, Dell, Johnson & Johnson and Lowe’s.

About the CEO Roundtable on Cancer

The CEO Roundtable on Cancer was founded in 2001, when former President George H.W. Bush challenged a group of executives to "do something bold and venturesome about cancer within your own corporate families." The CEOs responded by creating and encouraging the widespread adoption of the CEO Cancer Gold Standard™ which calls for organizations to evaluate their health benefits and workplace culture and take extensive, concrete actions in five key areas of health and wellness to address cancer in the workplace. For more information on the CEO Cancer Gold Standard and the no-cost, web-based accreditation process, please visit www.CancerGoldStandard.org.